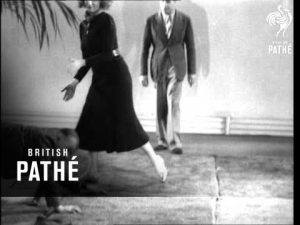 Various shots of a woman performing judo and self defence moves on a man in a room.

A man, presumably Bob Gregory, describes how judo can be used by ‘a damsel in distress'. Mr Gregory and another man (dressed as a tough in a flat cap) both try various methods of attacking the young woman. She performs a variety of martial arts moves to throw them to the floor. The two men vie with each other to attack the woman.

Gregory and the tough discuss attack with no come back and Gregory pulls the tough's jacket round his arms and punches hum in the stomach. He then stands with his foot on the tough's chest as if in victory.
FILM ID:1234.46